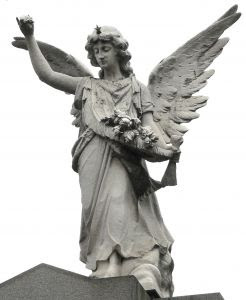 There's a song that says, "I need a little help from my friends." Ah, but does this help come from angels?

I've heard both pros and cons on the subject. Some get upset and view this as lazy writing. Your character gets out of trouble via supernatural assistance. Others shrug and accept the presence of heavenly beings in literature. After all, they're in the Bible.

I belong in the second camp with one important qualifier. As long as the angels are written in accordance with scripture, I don't have a problem. If people are worshipping them, praying to them, or are elevating them above God, it goes in the trash. Period.

That said, the scripture tells us to be hospitable to strangers because some have entertained angels unawares. Angels are called the servants of the heirs of salvation. They're heavenly messengers, such as the angel, Gabriel, who came to Mary and told her she'd been chosen to bear Jesus Christ. He also brought an answer to prayer to Daniel. A host of angels came to Elisha's defense in the Old Testament.

Most books with angelic intervention are labeled speculative fiction. What's your take on the subject? Have you read any books where the hero or heroine is rescued from a jam by an angel? Do you ever write angels into your manuscripts?

I've not used angels in anything yet, but am not opposed to it, depending on the story line.
Have a happy day:)
Karen

I wrote a play with angelic intervention. Well, it was more like a skit. Anyhow, the angel was sunject to what God wanted and his purpose was to reveal God's plan of salvation. But my main character never sees the angel. As far as books go, I haven't written in any angels.

I've read a few books where angels are mentioned but none that focus on them as main characters.

I have mentioned angels in two of my stories but more as a questionable possibility to for the MC.

Thanks for weighing in on the subject. Have a great day!

If you've ever read any of Frank Peretti's novels, he uses angels quite a bit. His early books dealt with spiritual warfare. I enjoyed them, but it's not the type of fiction I write.

You might want to submit the skit to a publisher. Maybe it could be re-written into a short story. Just a thought. :)

Thanks for joining the discussion.

To me, angels guide or inform, like they do in the Bible. They also fight demons, and in that case will be helping us in our plight.
Most of the time, God asks us to go through a process of overcoming, and our characters should have to go through process too.

I think M. L. Tyndall had a scene in The Redd Siren where the heroine's sister was being protected by an angel or something supernatural. I liked that addition to the book. It showed the supernatural at work. It fit because evil was a work, and it showed God's protection. Short scene, but poignant.

Thanks for your input. I agree that the characters need to grow and mature.

Thanks for the example. I haven't read that book.

Without getting into a long, theological discussion, I believe we'll be surprised at how much angelic protection we've had during our lives.

My WIP's MC could sure use and angel... but that would change the ending drastically!

I love angels in literature as long as they are working for good. I don't like bad angels or arrogant portrayals of angels.

LOL! A lot of our characters could use a little help from angels.

Thanks for stopping by and participating. :)

Unless the novel is a Frank Peretti-type story, I prefer a light touch. Too much of a good thing causes the focus to switch from the characters to the angelic helpers.

I actually had a scene in The Frontiersman's Daughter that dealt with a supernatural occurance but took it out. An early reader complained (she liked it and was sorry to see it go) so I inserted something similar in my 3rd book. I hope it works! Great, thought-provoking question, Susan.

How interesting the reader was upset you removed the supernatural occurrence! Most readers don't seem to have a problem with these references.

I'm not a fan of angelic intervention in fiction. I'd probably still read it, but I'm more of an angels-in-the-background kind of gal.

Thanks for stopping by and commenting. Always nice to see you.

I think it can be overdone and become more a story about angels than people. Still, it doesn't bother me as long as it's accurate and done well.

A couple of weeks ago, I reviewed Dr. David Jeremiah's angels on my Book Readers Central blog. Some review books I don't keep, but this one has a permanent place on my shelf. I highly recommend it to anyone writing about angels.

No, while I believe in biblical angels (like what you said) I haven't really written them. I'm a huge fan of Frank Peretti though, and I don't mind supernatural rescues as long as they go with the plot and aren't contrived. :-)

I agree with you on your thoughts of angels. They definitely throw a supernatural twist onto things.

Hope you have a great week!

You made another good point. Supernatural rescues must be part of the story, not contrived.

The writer must walk a fine line with supernatural doings. Too much and they run the risk of moving into a different genre (Christian speculative fiction).

I've heard of Dr. Jeremiah's book. Billy Graham also wrote about angels years ago. Thanks for bringing this resource to our attention.

I'm with you, Susan. They are beings sent by God to help us, not to be adored.

I've read a couple of books re: angels, one fiction and one nf. The fiction one was way out there, and I was not impressed. The nf, "Angels on Assignment" I found fascinating.

Oh, MYYYY, Susan! My next release grapples with this issue. Will be interesting to see what the editors do with it.

I kinda left it open for interpretation.

Can you BELIEVE we are studying this tonight in our Beth Moore Esther study!! Talk about God's timing.

You put together such interesting posts!
Patti

Oh wow! I think I'm with you on this Susan. I definitely think it's a cop-out for writer's to get their characters out of a jam by having angels come to rescue them. Although I have to admit, I don't read much speculative fiction, so this could be done well in that genre!

Thanks for your input and the title of the non-fiction book on angels. If we're going to include angelic beings in our fiction, it's a good idea to do the research.

LOL! I was expecting a comment on the post. Thank you for the birthday wishes! Nice surprise.

I'm having a lovely day.

Your take on angels agrees with mine exactly. Wouldn't it be fantastic to write "realistic" fiction using an angel to help someone. In third world countries, there are tales of angels doing wonderful things. I love to hear about them. In fact, believe it or not, my daughter saw an angel when she was young and ill. Yes, I think I'd like these stories.

God's timing is interesting. This post was written about four weeks ago and scheduled. :)

You have me intrigued about your book. Please keep me posted.

There's no doubt God uses angels. Most of the time, I think we're oblivious.

My Mom had an experience where an angel prevented a car crash, and my late husband also saw an angel while in the hospital. (He wasn't on any drugs at the time.)

I started to write a novel that centered around an angelic visit but never finished. I figured it was the Lords way of saying stick to the facts. ;)

I have one or two unfinished manuscripts, but none with angels. :)

Christian Speculative Fiction sometimes incorporates angels. I enjoy those stories (within certain parameters). If they appear in other genres, I prefer they don't overwhelm the main story.

I haven't used angels in writing, but I have played around with the supernatural in inspirational writing.

Thanks for making me think today, Susan! Actually, tonight, I guess. :)

Thanks for popping in and commenting. I know this is a busy time of year for you. :)

Yes, supernatural doings can certainly include more than angels. I've got a smidgen of it in my second manuscript.

I'm trying to think of a book that I've read where an angel came to the rescue and for some reason I'm drawing a complete blank. I do agree with you though, Susan, that praying to angels or glorifying them above God is an abomination I won't read or entertain in any way.

Thanks for joining the discussion. Frank Peretti, Tamera Alexander, and Angela Hunt have all incorporated angels in some of their stories. I hasten to add I didn't find any of them objectionable.

As I said, I don't have a problem with using angels as long as they're not elevated to an idolatrous position.

Susan:
I haven't written anything with angels because I don't want to do it wrong.

If you want to include angels, go to the best research book: The Bible. :)