On My Nightstand - Betrayed by J. M. Windle 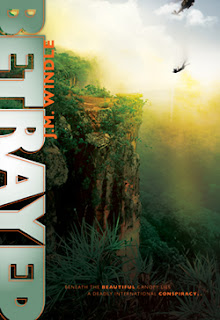 Vicki Andrews' latest assignment takes her to Guatemala. Her charity requires a thorough evaluation prior to extending support to the faith-based organization helping children. While there, she meets her sister, who works with an environmental group. Holly expresses concern over corruption.

Her observations of a nearby garbage dump where people live and eek out an existence. She notices movement in a garbage bag, and is shocked when she discovers her sister, shot and dying. The authorities write off the incident as just another incident in the crime-ridden city.

Vicki goes on a quest to find her sister's killer. Even as she works to uncover the truth, others try to prevent it from being revealed.

Jeanette Windle's grasp of conditions in underdeveloped nations reflects her experience as a missionary kid. The setting details, political maneuvering, and moral dilemmas leave no doubt that such scenarios occur in real life. The mind-bending logic of the enemy reveals the lengths to which people and governments will go for money and power.

The author includes an element of romance in the midst of a chaotic situation, as well as a strong spiritual thread. At 365 pages, this book kept me engaged. I'd love to read a sequel.

Do you like action/adventure/political books? Why or why not?

I've been trying to comment on blogs with no success. Blogger keeps eating them (not the dog - even if I had one)!

I'm not sure it will take this comment on my own blog.

Hi Susan .. sounds a very interesting and informative book - we could all learn a lot.

Comments I've had phases when I've commented in Word, copied and pasted - so I don't lose them. Usually full page comments as here, or pop up boxes as I have: seem to be ok - it's the embedded versions that don't seem to work for me ... I've taken to emailing people to post on my behalf ..

It's the way it is for now .. cheers Hilary

I would not normally gravitate to a book like this, but your description makes me curious about it. Plus, my husband and others from our church have gone to Guatemala. One team has shared extensively about the garbage dump and surrounding activity there.
Thanks for sharing this.
Blessings,
Karen

It depends. If there's romance and not too much boring details (like in-depth details on machinery, etc) I'll read those genres.
Sorry about blogger. It was doing that to me the other day too. It's not so bad on blogs who have a pop-up comment form.

Hi Hilary - I've even started having difficulty with pop-up boxes. Sometimes it takes two tries to post a comment. Thanks for the tips.

Hi Karen - If I had to give a one-word description of this book, I'd say, "realistic." Since you know people who have gone to Guatemala, I think both you and they would find it interesting.

Hi Jess - Jeanette Windle gets into a lot of relationship issues and intrigue.

The political aspect would probably turn me off. Not really my thing. :O)

Wow, Susan, your description of this book makes me want to grab a copy. I love action/adventure types of books. I love that it's not the same old same old type of story. We need more unique stories.

Hi Diane - See, that's something that interests me. We all have our favorite genres.

Hi Dena - There's plenty of action with unique settinggs and occupations. Jeanette is an excellent writer.