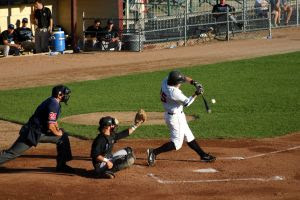 My Dad and Grandpa were rabid baseball fans. With one TV in the house, you can guess what occupied the 12" screen on a regular basis. In self-defense I learned the game.

The menfolk often regaled anyone who would listen to tales about the Yankee baseball greats. One that stands out in my mind is Herman "Babe" Ruth, a.k.a., The Sultan of Swat and The Bambino.

When Babe came up to the plate, pitchers quaked. They often gave him a base on balls, so they wouldn't have to pitch to him. The opposing team knew Babe would be swinging his mighty bat. Yet, while he hit a lot of homeruns, he also struck out more than most hitters.

As writers, every time we send out a query letter, a proposal, or meet an editor or agent, we're swinging our writing bat. A lot of times we strike out, but sometimes we get a hit. All of us dream of the day when we'll hit that homerun and come home with a book deal.

Babe worked hard, practicing and playing the game. He swung that bat and gave it his best shot. How about you? Are you in the game? Are you giving it your best effort when an opportunity comes your way? You may strike out a lot, but one of these days you may hit the ball out of the park.
Posted by Susan J. Reinhardt at 12:01 AM

Hi Susan,
Im in the game up to my neck right now! And my dad was a baseball fanatic with a game on the T.V., one in his transistor radio earphones and one going on the radio in the garage. Those were the good old days!
Blessings,
Jan

I'm up at bat with my game face on and an arm ready to swing a home run. ;)

Love this analogy. They hit a lot of balls before they get the homerun! :O)

Like this analogy! Some days I'm more prepared than others, but I'm getting more consistent. Good post.
Blessings,
Karen

You're right. We never know if we're going to hit the ball if we never take a swing.

Right now I'm swinging away and ready for the home run!

If the game wasn't on TV, it was on the radio. I was always happy when they went to the game. Then, we could watch the TV.

I took a mighty swing when I sent my full manuscript to the agent. We'll see if I connected or got a strike.

How many times have we seen a rookie hit a homerun at his first at bat? Not often.

It's the same with us as writers. We need those twins, Patience and Perseverence, working with us.

Thanks! I know what you mean. We all have days we'd rather forget. I'm sure Babe Ruth wasn't too happy when he didn't connect bat and ball during a game.

Great! I don't want to lose the game because I gave up.

By studying the craft and practicing, we're raising the chances of connecting with our writing bat.

I'm in the game more on my short stuff. I need to be more focused on my novel. Thanks for the reminder!! I have to get going:)

I like this, Susan! Yes, I'm in the game. I'm giving it everything I can with what is available to me now. Today. And I'm trusting God to bless the three fish and two loaves of bread in my little basket.

I'm formulating three short pieces for friends (blogging), researching for the WIP and for another project. Unfortunately, there's not a lot of actual writing getting done.

Knowing me, I'll go on a marathon.

Ooo, I like your analogy! Sometimes I feel that's all I have too. :)

Even after we hit one home run, we still have to keep our eyes on the ball. And we wonder if we'll ever hit another, and whether we'll have a decent batting average. So we just have to keep taking it one pitch at a time.

I love baseball. I know of one player in Detroit I like and he has struck out a lot and not had many hits. I still believe in him. Back when I was sending out over 50 proposals, I just got tired of striking out. I may get my swing back some day.

Oh Susan, I hope I hit it out of the park soon! But if not I'll enjoy the peanuts anyway!

Great points! We also have to run the bases. Hitting the ball is just the beginning.

Oh, I hope you decide to try again. Perhaps the timing wasn't right.

LOL! I hope you hit it out of the park too.

Did I ever tell you that the very first article that I ever had accepted for publication was at Guideposts. When you start at the top there's only one way to go! LOL.
Blessings,
Penny

Guideposts! Wow, that was quite an achievement for a beginner. Keep swinging that bat. :)

Good analogy. As a freelance writer, I've been sitting on the bench a lot given the state of the economy. Still, whenever I get the chance I march up to the plate, swing the bat and give it all I've got :-)

Good for you! I sometimes need someone to give me a push. :)