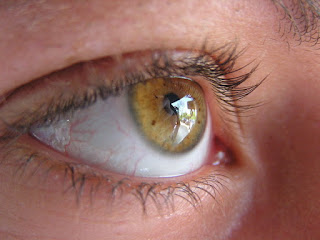 This oft-repeated phase has many writers scratching their heads. Of course, you have to "tell the story." That's what storytellers do, isn't it?

There's a way to get a story on paper that puts the reader into the character's head and keeps them connected to the action. Here are some examples of telling and showing:

Marianna felt drained after her conversation with Virginia. The woman had a way of making her an emotional wreck.

Marianna walked into her apartment and threw her keys on the entryway table. She collapsed onto the couch and considered staying there for a week - maybe more. The next time Virginia asked her to go out to lunch, she'd refuse. Even the luscious food at Chez Magnifique wasn't worth listening to the other woman's constant criticism.

In the telling segment, we're told how Marianna felt and why. In the showing example, we're right there and nodding our heads. Who hasn't experienced this kind of exhaustion at one time or another?

What did it matter Carrie said she didn't like guys that said one thing but did another? Guilt haunted him over the hypocritical life he led before he became a Christian. If she found out about the real Patch Lawrence, she'd probably drop him in a second.

Carrie's voice echoed in his mind. "I can't stand a hypocrite."

He cradled his head in his hands. What was the use of pursuing Carrie? Once she discovered his past indiscretions, she'd be gone in a flash.

In the telling example, all the details are laid out for the reader. In the showing example, the reader turns the page, hoping to discover what indiscretions Patch is talking about and what caused Carrie's outburst.

The whole show, don't tell admonishment still trips me up at times. I'm thankful for critique partners, who point out areas where I miss the mark.

Some things to keep in mind:

1.  Telling reports what is happening in the story. Showing allows the reader to see the action as it unfolds.

3.  Ask yourself: "Does this scene evoke an emotional response in me or does it tell me facts without reaching my heart?"

Writers:  Do you have a hard time with show, don't tell? Please share.

Readers:  Does this help you understand why some books you read keep you fully engaged in the story, while others fall flat? What are some of your favorite books?

These are great examples of the difference between show and tell. I love being right in the scene as a reader, and as a writer description is my favourite. So I tend to go into showing, however sometimes weak on the telling!

It's good to be weak on the telling. :) Even as a non-fiction writer, I used fiction techniques to make articles and devotionals come alive. It resulted in more acceptances. Have a great week!

Excellent examples Susan, thanks for sharing. Even in writing non fiction I want to use story telling more and more, so this helps.