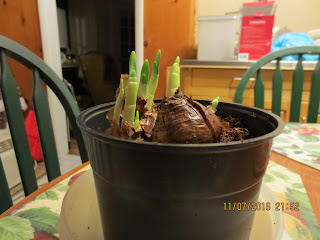 For years, I've been wanting to buy the paperwhites that show up in stores this time of the year. The thought of having flowers in winter has a certain appeal. Maybe that's why I'm a fan of African Violets and Orchids. 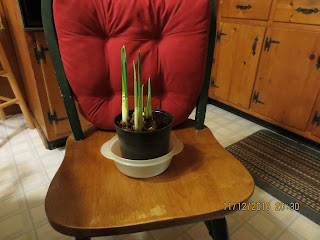 You know something? I never got around to actually purchasing them until a few weeks ago. Planting them was simple - the pot, bulbs, and growing medium were included in the package. They're growing fast even though they haven't bloomed as of this writing. Why on earth did I wait so long? How many other adventures have I missed because of procrastination? 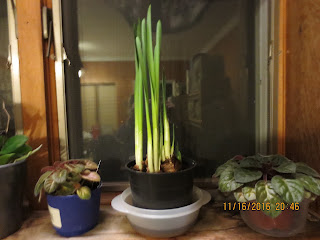 I'm gradually changing my ways. Fourteen years ago, I quit a good job and went to at the Lord's prompting. This act of obedience was one of the hardest things I've ever done, but it led to meeting my late husband. My writing journey began in earnest after we married. His encouragement and support helped me shush all the negative stuff in my head.

Paperwhites may not seem like a big deal, but they represent the person God has called me to be - one willing to try something new. What is He whispering to your heart? Write that book? Volunteer in the church nursery? Visit those in prison? In Mary's words to the servants, "Whatever He says to you, do it."


Writers and Readers: Do you procrastinate or do you dive in with both feet?

Susan: As I have gotten older, I approach things at a slower pace. Now, I need to share with you that several years ago, I was in a women's Bible Study at our former church. We had a Christmas party that year and I found myself purchasing a Paperwhite kit for the gift I was to give. I don't really know how this one particular older woman received it but she remembered them from her childhood. She let me know the progress of the plant every so often. I believe you have helped me decide what to give another friend for Christmas this year. Thank you.

Good analogy, Susan! I need to step out more like this sometimes too. Blessings for your week! :)

Hi Quiet Spirit - I'm glad my experience gave you some ideas for Christmas gifts. I'm now growing an amaryllis received during a Pollyanna exchange at work.

Hi Karen - I think we get in a rut of doing the same old thing day in and day out. It's good to try something new.