The Gravy's Dripping Off My Plate 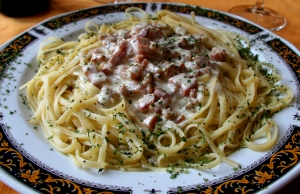 "My plate is full, and the gravy's dripping over the edge."

My late husband used this saying when his schedule became unmanageable and overwhelming. He was one of the most descriptive storytellers I've ever met. His words flashed pictures in the listener's mind.

Does our writing have that effect on the reader? Can they see and hear the action? Describing ordinary occurrences in extraordinary ways perks up interest and involvement with the characters.

What are some favorite expressions that can be incorporated into your work in progress?

Wow, you got me thinking on Monday morning Susan :)
I don't see myself as a story teller, but when writing my columns (for a Christian magazine in Holland) I always like to use the scene where I am riding my bicycle along the river. That is when I think and talk with God about certain matters. I hope to inspire people to go outside adn do the same.
Good post, thank you Susan.

I do like expressions that make you see a picture in your mind. Your husgand's is very vivid. I can't say that I can come up with anything quite as good.

I can see the bicycle theme used in many applications. Have you thought about writing a devotional?

Listen to people around you. You'd be surprised at some of the things they say or repetitive expressions they use. :)

I like that! Some weeks I feel like the gravy is dripping down the side of the tablecloth too. :) Good food for thought!
Blessings,
Karen

Hi Susan .. that's a good phrase .. I think I am in that state now .. still at least the plate is overflowing! Better than desperately licking it clean ..

A very good description of what is going on in my life, if I don't stay on top of things. And sometimes I don't.

An old expression is "busy as a cat in a room full of rocking chairs."

You know, I actually look for unusual ways to express the usual. Typically I make things up as I go.

The overflowing gravy is a vivid word picture. I'm thinking your late hubby would have been a fabulous blogger!

Right now, mine is all over me and on the floor!

Yes, there's something to be said for being active instead of idle. :)

Oh my, he hated writing. He left that to me, including our business correspondence.

I never heard that saying before. My grandmother liked to describe heavy rain as, "it's raining cats and dogs."

My oldest son has this same uncanny ability. I need to take a lesson from this. Thanks for your ever challenging points to ponder!

Since I have a lotof action and fights and explosions then yes, the reader needs to hear and feel the action. I use all five sense to help build a cinematic experience for the action scenes.

well, you definitely succeeded in making me hungry for some gravy :)

Maybe you can use some of your son's favorite sayings. :)

Do you see the action in your mind like a movie? I do.

Ah, the power of suggestion! The phrase often has the same effect on me.

Now, let's get the reader salivating. :)

When I read a book, good descriptions are an important part of capturing my attention. Love the expression your husband used! Great mental picture (and appetizing, too!) You've got me thinking of expressions that I can use - even as a non-fiction writer.

Also wanted to respond to your comment over at Life Lessons: You bring up a great point - performing daily maintenance is so very important to make the pruning process a bit easier! I'll be sure to let Precious know that you think she's gorgeous - I'm sure she'll wag her tail furiously in response! Have a beautiful week full of God's blessings!

As a non-fiction writer, I learned to use fiction techniques. When I implemented them, my work started getting published.

Whether we write fiction, non-fiction, or both, we can all benefit from creating visuals for our readers.

I always enjoy your similes and metaphors, Susan. I like this one from Thomas Wolfe:

"He was like a man who stands upon a hill above the town he has left."

It makes me wonder what the man is thinking as he stands there. Is he happy to have left the town, or does he regret leaving?

Oh, I like that quote! I thought immediately of Jesus viewing Jerusalem and mourning.

Now you've got me really thinking. For me to do what you've described here with words would take a very long time. That describes my editing world--never ending. I can't think of an example I have right now, but something to help in this vain would be to use onomatopoeia words when possible, like zip, swoosh, boom, bang, meow.

So nice to see you around the blogosphere again. :)

With any writing skill, it means practice. I try to work with one scene and bring it to life. Reading also exposes me to techniques I haven't used before.

I'll pop over to your place soon.

I love your husband's creativity. I need to juice up my creativity because I've been editing so long all I have left of lemon rinds. See! My BAD attempt at getting the juices flowing!!